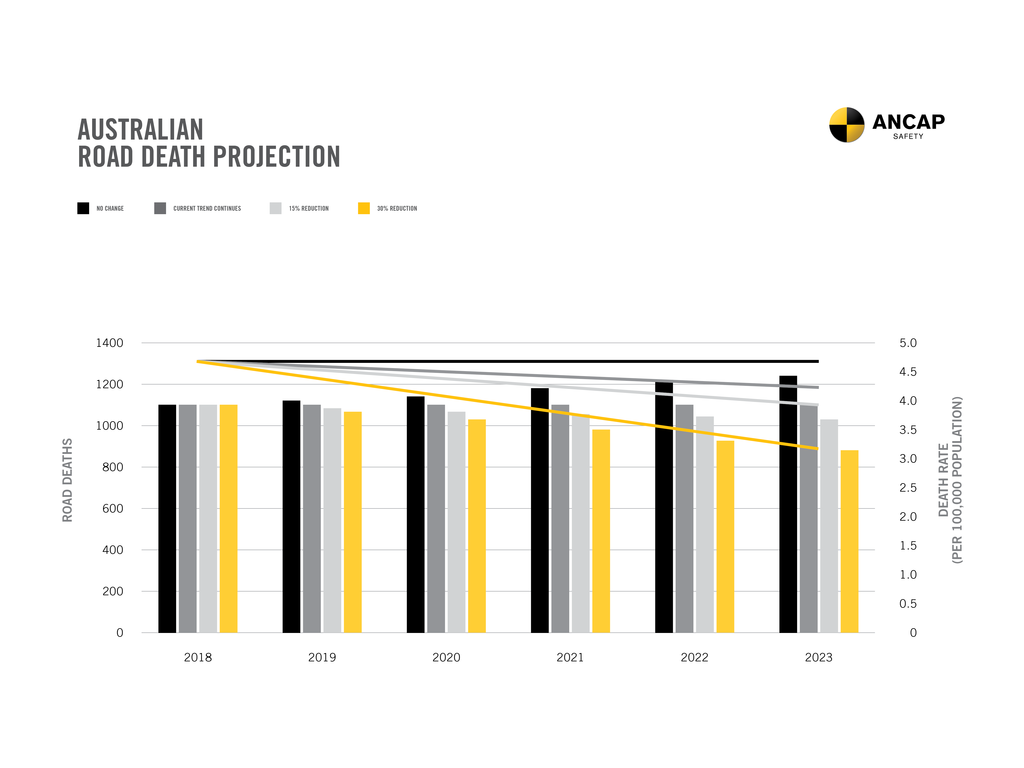 Are we doing enough to lower the road toll?

Following an overall reduction in road fatalities in 2018, Australasia’s independent vehicle safety authority, ANCAP, is calling on all Australians to help play their part to save more lives on our roads.

ANCAP Chief Executive, James Goodwin provides his thoughts on what could be achieved if we pushed the boundaries.

So why do we accept that people will die on our roads every year? Every day?

As we farewelled 2018, we also farewelled 1,144 people who died while using Australia’s roads.

Most of these were not as a result of deliberate criminal or reckless activities – they were ordinary people who didn’t expect to kill someone when they got in their car, or to be killed by someone else making a mistake.

Targets have been set to reduce road trauma by 30 per cent by the end of the decade, and while the majority of states achieved a reduction in fatalities in 2018, road fatalities and serious injuries remain at rates above that needed to meet the target.

Despite a 50 per cent growth in population and a two-fold increase in registered motor vehicles, Australia has achieved substantial reductions in road fatalities over the past 30 years. Between 1980 and 2010, the annual road fatality rate declined from 22.3 to 6.1 deaths per 100,000 people. Last year we recorded 4.58 deaths per 100,000 population.

The overall long-term downward trend is encouraging, but why do we continue to accept any loss of life on our roads? What would it look like if we were to push the boundaries and prioritise doing more?

If we accept that what we are doing is enough and the current road fatality rate stays as was in 2018 – it is estimated that over the next five years, another 6,000 lives will be lost on Australia’s roads. A shocking projection.

But if we push the boundaries and multiplied our efforts to target a 30 per cent reduction over the next five years, some 1,100 lives might be spared in that time.

There is no silver bullet. There is no one factor which influences all road crashes. There is no one crash type. No one fatality type. We run off the road and hit a tree; we are T-boned at an intersection; we are struck while walking across the street; we are rear-ended in traffic; we are clipped while cycling to work.

One fact is clear – we are more mobile than ever. Mobility has increased and our means of mobility has also changed. This will continue to evolve, but how can we remain more mobile and at the same time, remain safe?

The ‘road safety triangle’ is one way to look at it. We need safe roads, safe road users and safe vehicles. Each of these aspects are fundamental to improving road safety. Take one of these away, and the other two should be there to support you.

As Australia’s independent vehicle safety advocate, ANCAP has always pushed the boundaries, with our initial efforts in the early 1990s met with strong resistance. But we persisted. As we gained further traction among consumers and vehicle brands in the 2000s, that resistance shifted to acceptance. Today, our position is one of influence.

The automotive industry plays a crucial role in improving the safety of the Australian vehicle fleet as they - spurred on by consumer influence - are the ones bringing safer cars to the marketplace.

Five star safety is now the expected standard, and increased market pressure can be borne through the introduction of new guidelines requiring the portrayal of vehicle safety information across advertising material.

There needs to be focus on educating road users about the availability, function, benefits and limitations of collision avoidance technologies and to build their confidence. Driverless vehicles replacing the family car are some way off, but automated functions which can assist the driving task are already available in most new models.

However, connected and automated safety technologies being built into todays ‘smarter’ vehicles rely on consistent line markings and signage to work effectively. We must support regulatory change and encourage infrastructure providers to build roads that cars can ‘read’.

No longer must we communicate to drivers or vehicle owners - in a changing mobility environment we must empower all road users to make safer vehicle choices and have them understand today’s vehicles have the ability to prevent crashes. People who use a vehicle as a mobility service shouldn’t accept a less safe vehicle.

New cars, however, are just one part of the discussion. There are around 19 million registered vehicles on our roads with an average age of 10.1 years. If we can reduce the average age of our vehicle fleet by just one year over a four-year period, 1,377 lives could be saved . This can only be achieved by increasing the accessibility and affordability of new cars.

It is clear more of the same is not enough, so let’s set ourselves ambitious targets, and show leadership and shared responsibility to work to reduce the road toll.

We can all play a part in helping Australia drive towards zero. It’s a challenge, but not an impossibility. Let’s take on the responsibility and do what we can to keep ourselves and each other safe on our roads.